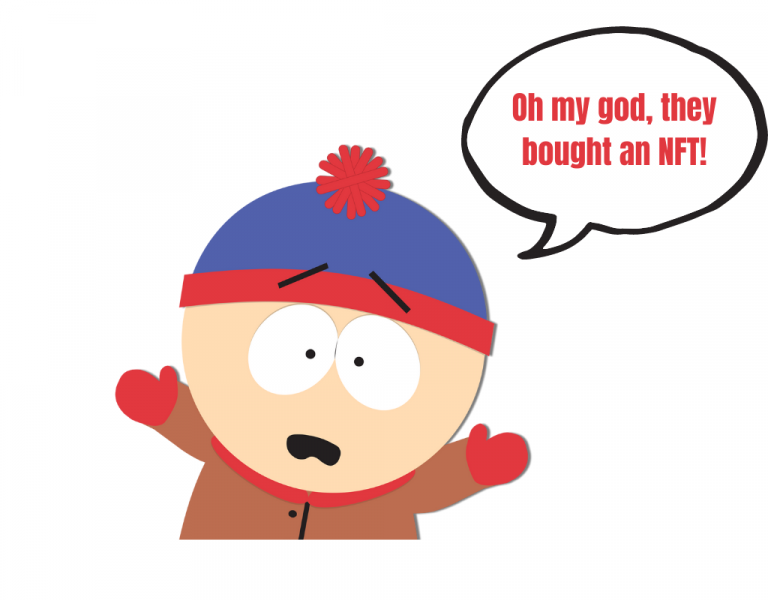 South Park Is More Bullish On NFTs Than You Think

Surprisingly, the South Park NFT references aren’t as negative as the coverage of the special has made it seem.

South Park’s latest special — with a name I will avoid for potential SEO repercussions — delves into the NFT world with surprising results.

He didn’t make money off nfts, he made it off getting other people to buy NFTs. — South Park

Most of the episode is dedicated to — rightfully — mocking the scammy, Ponzi-ish side of NFT PFP projects. Set in the future, long-time South Park character Victor Chaos (aka “Butters”) is locked up Hannibal Lecter-style because of his serial killer-like ability to convince people to invest in NFTs. Turns out, like many in the NFT scene, Butters had first developed his prowess for pushing NFTs during lockdown.

Recommended: Bitconnect Is In The News Today. Why?

After the adult versions of Kyle and Stan accidentally help Butters escape from the asylum, Butters convinces throngs of South Parkers to buy some of the craziest sounding NFTs. It’s not long before they are taking advantage of Ethereum dips to add a rainbow farting with Tom Brady’s signature on it to their OpenSea collections.

But, funnily enough, as Kyle and Stan are trying to convince the team of scientists working on a time machine (don’t ask, just watch the episode) to focus on the task at hand rather than continuing to buy the dip, the scientists manage to give pretty strong reasons for why Web3 and NFTs aren’t inherently evil.

One of the characters reminds Kyle and Stan that NFTs are important because they are “a way for artists to not only keep ownership of art,” but also, “be paid a commission on it every time it transfers owners.” Another character points out how antiquated centralized trust systems are. And another says communities have always formed around ownership.

Technology is neutral. Sure, in this instance, Butters takes on the parlance of an MLM CEO to dupe unwitting victims into his Ponzi, but a different, more inherently decent person could try to use the technology to preserve ownership rights for artists. Imagine if music NFTs were around when artists were negotiating their contracts in the 90s? They wouldn’t have to be fighting it out in court to get paid for their streams. Wouldn’t that be an improvement over what we have now?

But yeah, NFTs are dumb and pointless and NGMI.