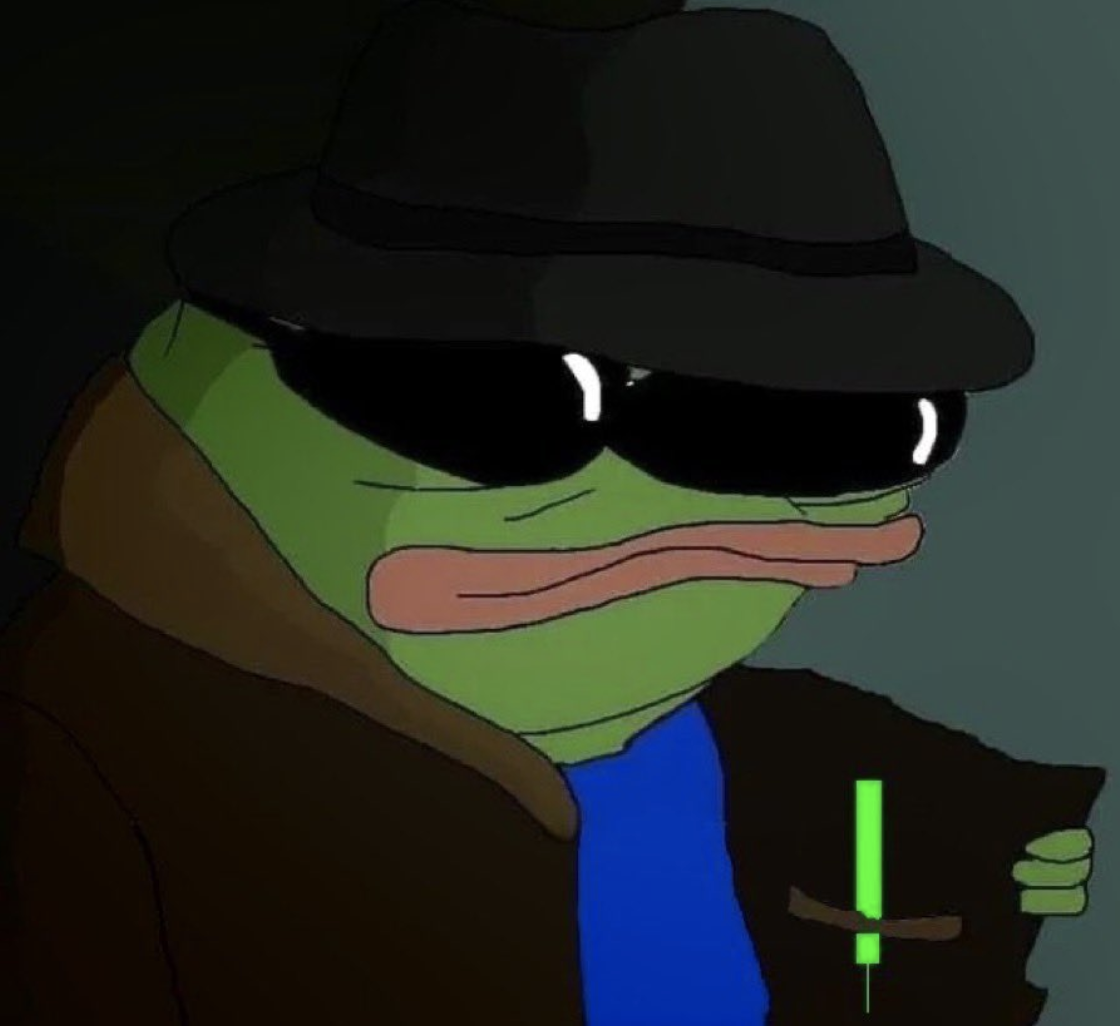 What Is The “God Candle” That Bitcoin Traders Are Waiting For?

If you’ve spent any amount of time on crypto Twitter in recent weeks, you may have come across mentions of traders waiting on an impending “god candle.” What even is a “god candle,” and is it something you should care about?

What Is A “God Candle”

As Bitcoin (BTC) continues its consolidation below $60,000, investors and day traders alike anticipate a bullish breakout to the upside to continue Bitcoin’s march to $100,000. The “god candle” that everyone is waiting on is just what it sounds like – a massive green candle that can propel Bitcoin towards new all-time highs with divine force.

A lot of traders think that $10,000 daily candles for Bitcoin are coming inevitably, but whether that fast of movement comes this bull cycle or the next is anyone’s guess.

Are you ready for +$10K daily candles? pic.twitter.com/SSOCRNalJ5

If we take a look back in history, there are a few impulse moves in Bitcoin’s price history that I think earned themselves the “god candle” title. 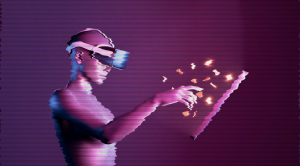 The most recent move in history that comes to mind happened back in February of this year. Shortly after Tesla CEO Elon Musk announced that his company would accept Bitcoin as payment for its vehicles, Bitcoin proceeded to grind up steadily to $38,000 before blasting off more than 23% in a single day to a new all-time high of $46,747. 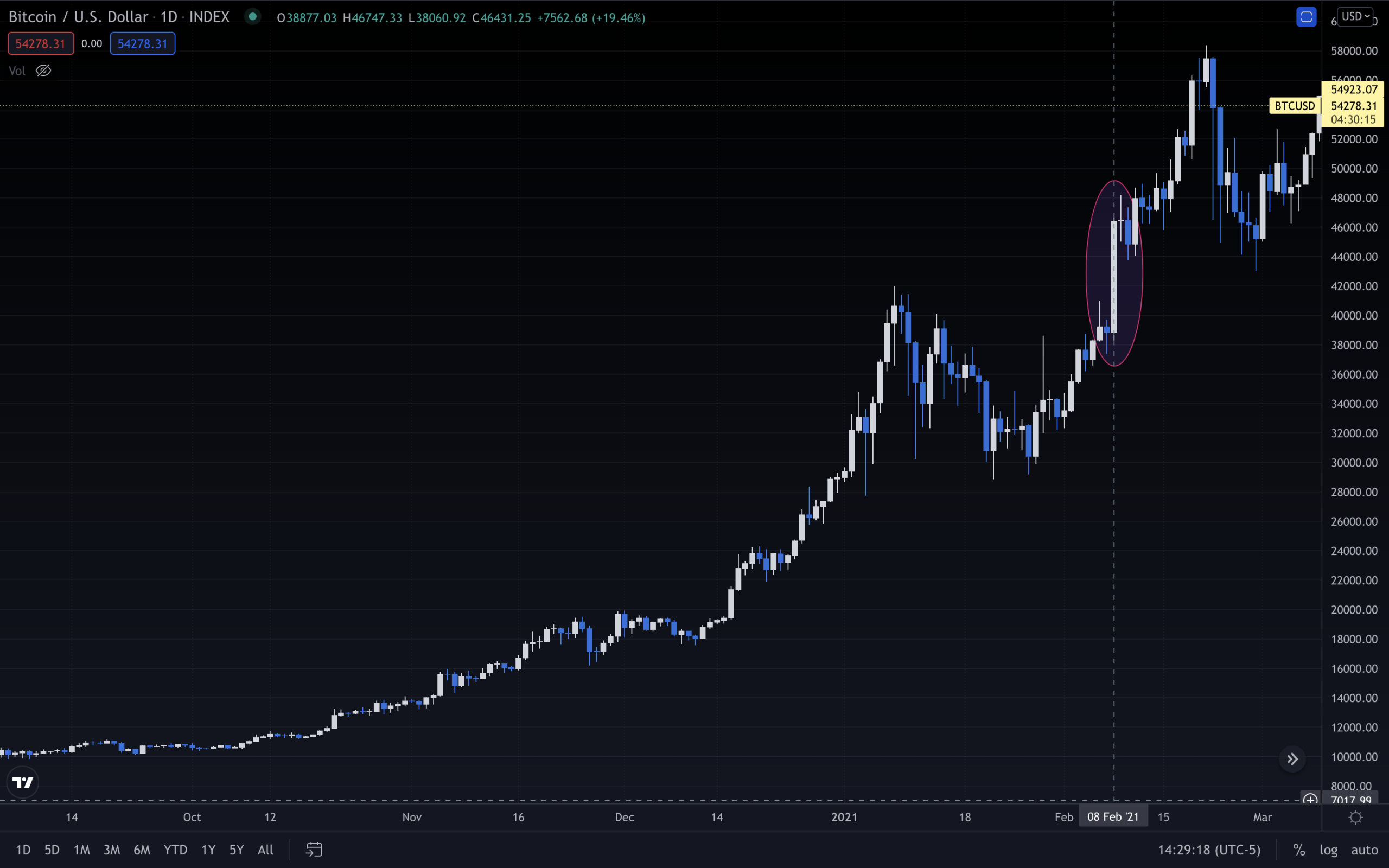 The next moment in Bitcoin’s price history that I think warrants “god candle” status would be Bitcoin’s recovery rally from the bear market low of 2019. From an open of $4,131, Bitcoin rallied nearly $1,000 to $5,108, representing another roughly 23% daily move. 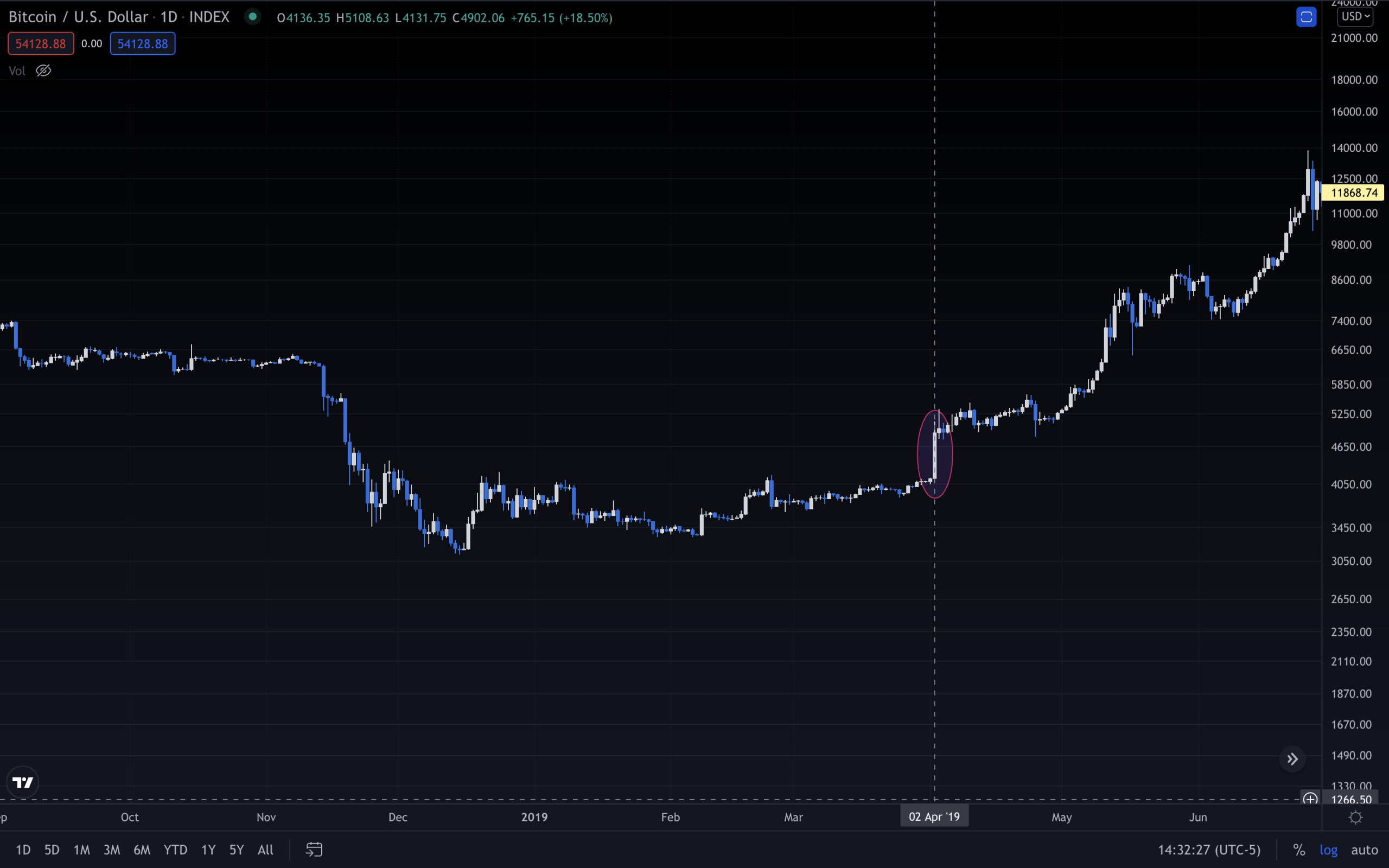 Taking a look further back, I think May of 2011 marked the single most exciting single day for a Bitcoiner in the asset’s history. In one move, Bitcoin skyrocketed over 52%, from $3.81 to a high of $5.99.

While the unit gain doesn’t look as impressive, I think most Bitcoiners can only dream of getting another 50% jump in a single day. 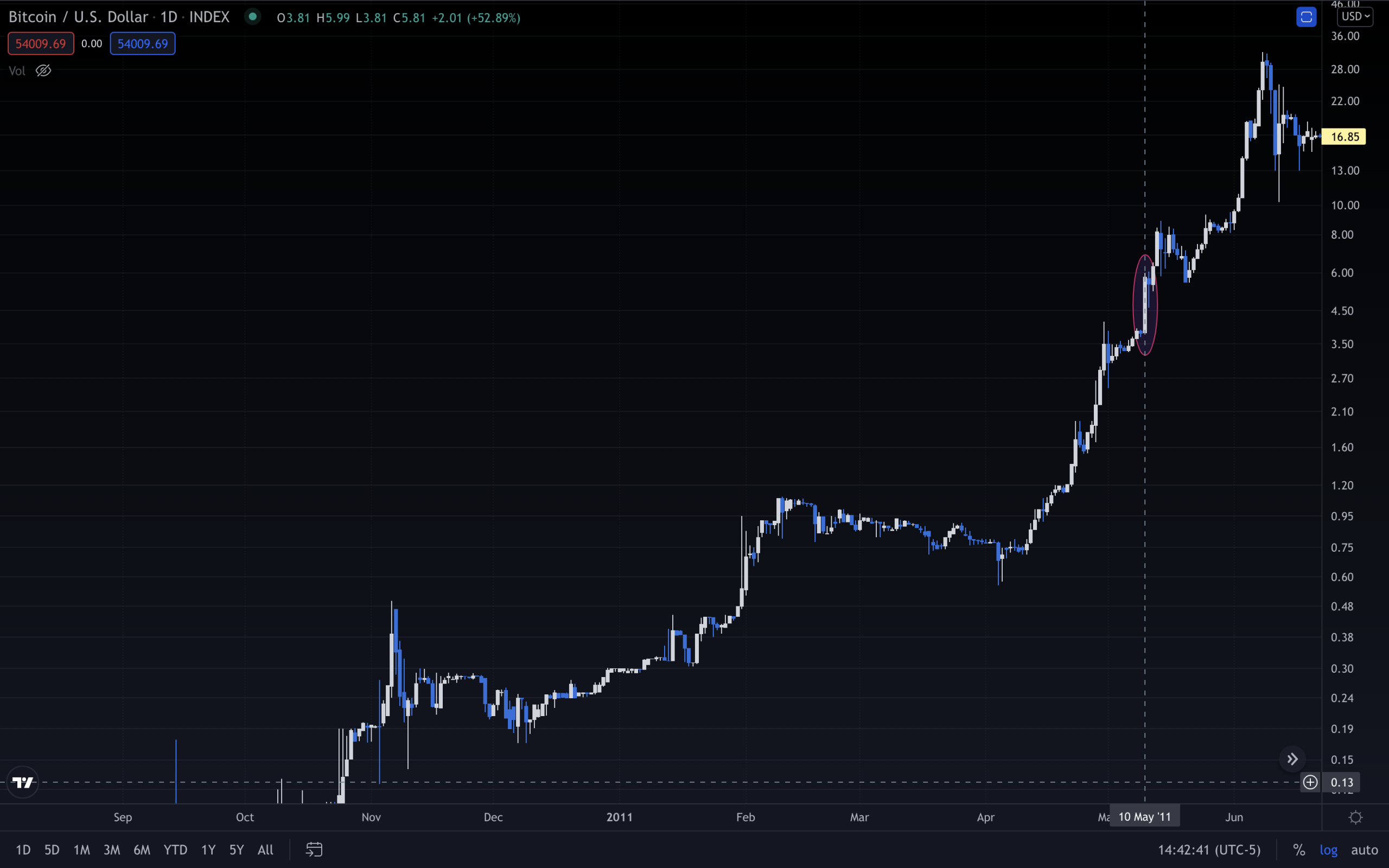 Looking At The Bitcoin Price Now

Today, Bitcoin is looking awfully bullish after a bearish past few weeks. After grinding down from $69,000, Bitcoin looks to have found support at $46,000 and is springing back higher. At the time of writing, BTC is up over 5% on the day, trading at $51,229. 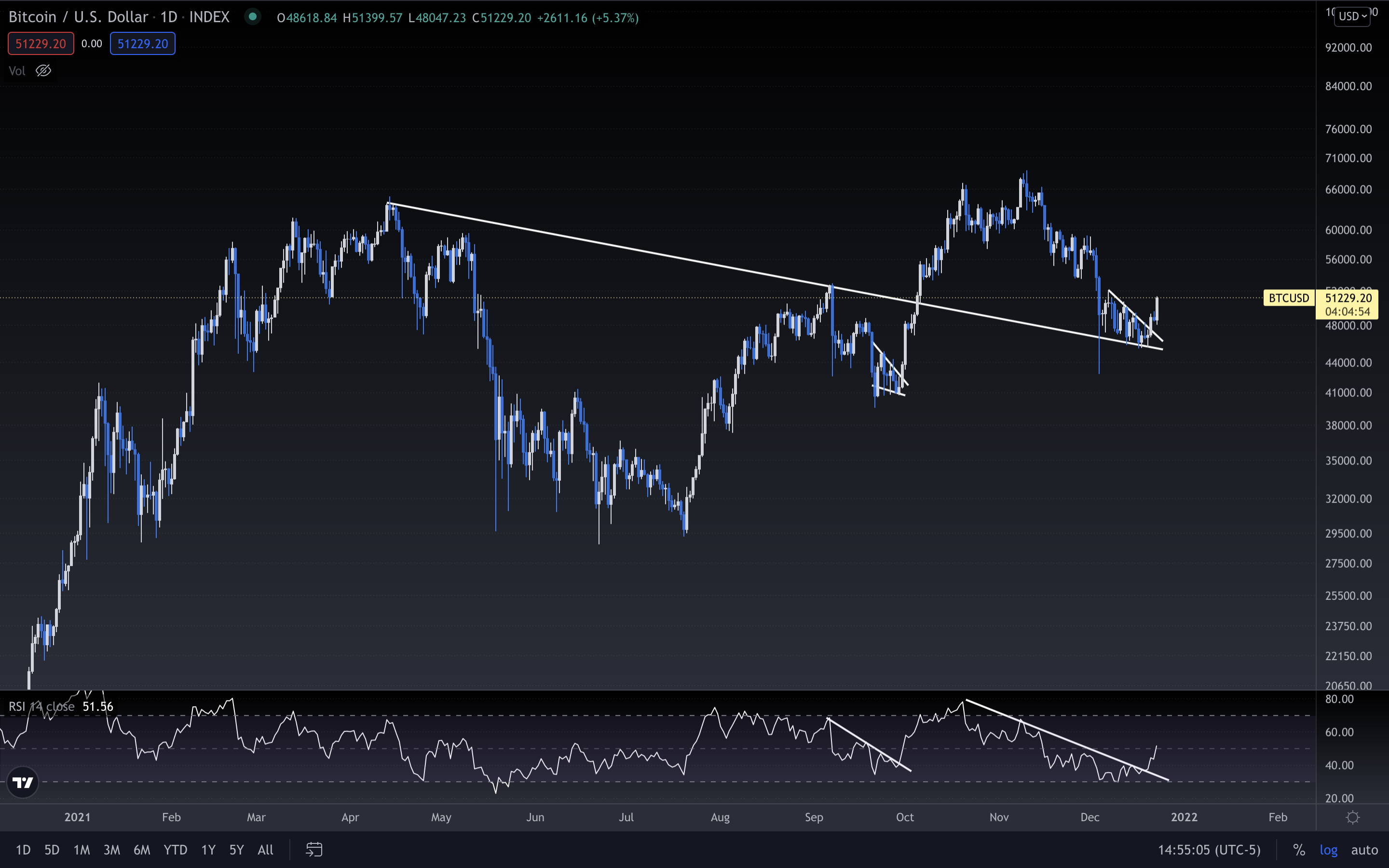 The current price action looks eerily similar to the initial falling wedge pattern from late September, which resulted in a 66% pump to new all-time highs. The relative strength index (RSI) is also telling a similar story and has confirmed another breakout to the upside.

RECOMMENDED: the top 10 bitcoin stories of 2021

There’s no telling when the next coveted ”god candle” is coming, but you probably don’t want to end up being this guy.

Court policies in support of Surge versus SEC; Bitcoin decouples from heritage markets